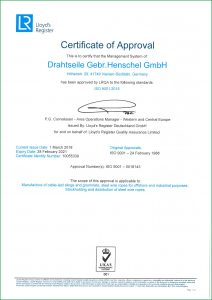 In the very early days of ISO 9000 standard (quality management systems), Drahtseile Gebrüder Henschel took the decision to install this “heavy tool” and chose Lloyd’s Register as a leading company to be in partnership with. First steps were made in 1987 when ISO 9000 was just established and a set up of such a quality system was far away from easy doing. Companies had to be adapted to the ISO and ISO was not a tool for the company as it is nowadays.

A long journey of improvements affected the whole company. It changed thinking and acting of employees, manufacturing processes became higher levelled, documents have been adopted and suppliers had to establish much more, to meet the companies focus on high quality. This process is still in progress.

Since then Drahtseile Gebrüder Henschel has been certified and is still holding its ISO 9001 certificate.